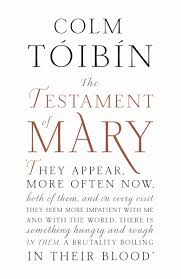 It is really good for a reader to be “forced” to read outside their interest and genre, this leads me to the Colm Toibin book, The Testament of Mary. My natural urge would not be to grab a historical or religious content book so it is good for me, in that sense.

We all know the story of Mary and Jesus and how he died on the cross and how the New Testament tells us this story from the narrative point of view of the men so Toibin takes the story from Mary’s side in this novella. I read this in a train journey to and from Carlow, about 2 hours. It was fine, the things I liked were the emotional connection Mary showed with her son, who she never once names as the Son of God. In fact, she doesn’t even believe that he is who he or his followers say he is. She mistrusts his disciples, calling them corrupt eejits, basically. She is very alone and when she sees her son crucified on the cross, she runs away, leaving his body there.

This is where the story jars a bit. We can have fictional accounts of infamous characters from history and Toibin creates a Mary that is doubtful, bitter but ultimately strong enough to stand up to the men at that time but I don’t believe that a mother would watch her only son be crucified in this way and not want to do something. She weighs up the whole situation a bit too poetically and Toibin tells us that she is afraid to help Jesus as she might get hurt. Again, I am not sure if I could buy into this.

There was much controversy around this book but I was not moved in that sense, people can get protective of mythic/religious figures and I think that Toibin made Mary a more human character. Of course, she would have not believed he was the one. She was Jewish, she was waiting for the saviour and in no way would she have though that her son might have been it.

At the end, she turns to the cult of Artemis, another thing that jarred with me. I don’t think a Jewish woman who was religious about attending temple would just decide to stop and take up one of the foreign cult religions of the time.

Testament of Mary is a slow moving, poetically written book but I am left wondering if these very things are the things that stop the reader connecting with what would have been a very normal occurrence and woman at the time. Mary is too self-occupied and thoughtful about the whole thing. I like the idea behind it, I like that Toibin wanted to give us s story from a woman and not the very shaped and crafted bible stories.

Read it and make up your own mind.