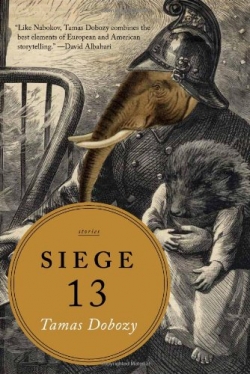 Often, I get sent books to review that I am so excited about. I get so excited I take photos of the cover and dream about when I can read it. Sometimes, I will have a cheeky first read of the first story or few pages and then put it away and then dream all over again. 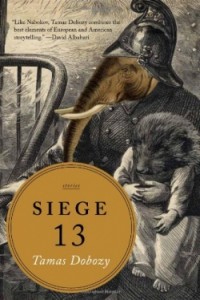 With Siege 13, I felt a bit stressed. My friend, Terry is a real-life historian and when he picked it and started to flick through, wanting to read it and then commenting that he was surprised I was “into this kind of book”, I got worried. I enjoy history but fiction is better. I don’t really enjoy historical fiction and I like my covers to be fun and touchable.

Siege 13 is a short story collection all based or inspired around the Siege of Budapest, this was where the Soviet Union captured the Hungarian capital city of Budapest towards the end of World War 2.  The siege began when Budapest, defended by Hungarian and  German troops, was first encircled on 29 December 1944 by the Red Army and the Romanian Army. It ended when the city surrendered on 13 February 1945. It was a decisive victory for the Allies in their push towards Berlin.

That is the history part over and in fact, there is no need to worry yourself about the above details for I was much relieved when I started reading the first story The Atlas of B. Gorbe. It’s the title that didn’t attract me and that is a shame as the story was immediately different and contemporary and I was hooked. I spent my whole time exclaiming to anyone that would listen( Read, Simon) that this book was brilliant and that I had been judging it by the cover and that it wasn’t boring like some historical fiction can be.

That is the beauty of this book. Each story is inspired, hugely or loosely connected to the Siege of Budapest, war, its horror, aftermath, life and death. It’s all there. The narrative style stays consistent throughout and Dobozy writes history as fiction. Each story sheds a spotlight on the human condition, the relationships we form and how war can shapes them for generations to come.

The stories are either written directly in Budapest during the Siege or in Toronto where an exiled community live, trying to get away from the past.

My favourite story was “Rosewood Queens,”a girl tells us about his father’s new girlfriend who is called “Aunt Rose”. She is a strong and fascinating character. She had a strange habit, she goes from shop to shop buying only the queens out of chess sets; a sort of regaining of herself, where  she makes the chess set she leaves behind worth nothing. The narrator’s father loses out in the end because of his inability to communicate his feelings and let go of his past. The ending is perfect-

There was nothing, of course, and had never been, only two queens desperate for the affection of an absent king, trying to conjure him into existence and losing each other along the way.

What can be challenging for the reader is the disjointed nature of short story collections, Dodozy solves this by using the common theme or event of the Siege and the war. He shows how its effects could be subtle or more apparent with some stories barely hinting at it. He writes in an easy and unobstrusive style which is immediately accessible to the reader.

Siege 13  can be purchased at amazon here or at the publishers, Milkweed Editions here. You could grab it on kindle too but you already knew that.