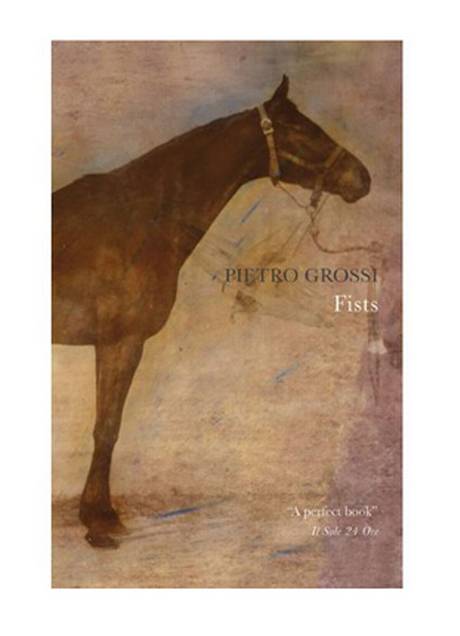 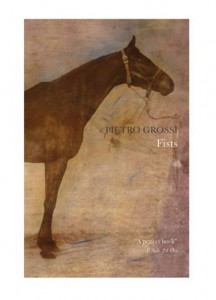 If you read my last blog post( and shame on you if you haven’t) then you will see that I bought a couple of books. One of those was a short story collection by the Italian writer, Pietro Grossi called Fists.

It has been translated exceedingly well. So well that I could have placed these stories in any location at all.

Fists is made up of three long short stories, all linked with the theme of boys growing up and becoming men, memories of childhood and animal and male instincts.

The first story is called Boxing and it features a nerd boy who has an alter ego-he is a super, super boxer in his spare time! Except, he doesn’t box. Eh? Well, no he does train and box but has never played a boxing match so he gets a bit of a reputation of cult status. But, the one day he meets another boy who might be better than him. And, so the story takes off…

The next story Horses, was my favourite. A story about two brothers who are given horses to look after and tend to. One brother grows apart from the other and moves to the city while the one that stays at home learns the tough lessons of manhood and nature. Quite brutal in parts but the bond between the two brothers is touching.

The last story The monkey did not go down well in the short story critic world. Even, the guy in the book shop in Bath was not happy with it. They all felt it jarred and stuck out. I disagree. The story is about a grown up man, Nico who seems to live a childish life. One day, he gets a phone call from his old friend’s sister. She tells him that his old friend from his childhood has started acting like a monkey. Yes, it sounds bizarre and it is. And, that’s why most people didn’t like it. The scene where Nico goes back to the village where he grew up is packed ful of memories that he was trying to escape from. One of them ends up being his friend who is living like a monkey. Others are old girlfriends and Nico’s own Dad running around the house naked. So, the story is not really about the monkey thing but it is…It’s about running from the past and creating stories to tell ourselves that we are normal. And in the end, that’s what Nico does.

Fists is very different, the voice is self aware in many parts, showing the main character’s sometimes pointless thoughts. But, the stories are simply and well told with themes that will hit off woman or man. Despite the masculine title and characters, Fists  will be enjoyed by all readers. I really quite liked the weight of the three stories as opposed to twelve shorter ones for a change.