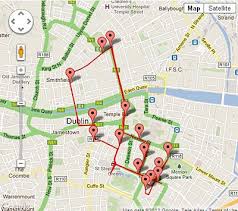 The brilliant thing about the Dubliners, which you really should have read by now, is that the stories can stand alone or in the group they are placed in. The other cool thing is that you can read them as merely an entertaining, satirical look at Irish people or you can delve further and further down the rabbit hole of Joyce’s brain.

The two gentlemen in this story are messers. They like to fraud women and money from those women. Throughout the story, we get pockets of symbols of Ireland like the harp player or the green peas and the orange, ginger ale. But, let’s not stop there. The whole story is situated in the city of Dublin as the two gentlemen take a walk and start at Rutland Square, now Parnell Square and end up right back in the same place again. Yes, yes, you can see what Joyce is saying about these two men and Irish people and history in general i don’t need to point it out but don’t worry your head if you want to enjoy this entertaining story about two awfully horrid men who love a bit of full on with the women!

Lenehan and Corley are the two said gentlemen with Corley being the more active rogue type while Lenehen does some reflecting on the life he leads. Though, when he sits down to a meal of peas with vinegar(Ew), he does have an epiphany of sorts. He knows he is not where he should be, he feels disillusioned by what he does for a living and he craves a wife and children and proper job. But, this epiphany does not last for long. In fact, he forgets about it quickly. This is what I like about Joyce’s epiphanies in the short story. they often lead nowhere and cleverly the journey the men take also leads them right back to where they started. Which means, I’m off to re-read the story and think about betrayal between the two men and the link with Irish society at the time. I am also thinking about Ireland and what Joyce is saying about it and its relationship with England.

Next blog post, I will be looking at Evelyn Conlon’s take on the Two Gallants and I am hoping for a subtle commentary on where Ireland stands now in the world, Europe and how pointless some Irish peoples lives are in terms of materialism and disillusionment. Let’s hope!

The Two Gallants story can be read and devoured in Dubliners by James Joyce. Happy Bloomsday!