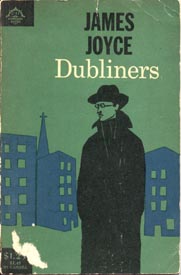 To commemorate the anniversary of Joyce’s Dubliners, his short story collection, Tramp Press have released a new collection. Dubliners 100- a reimagining of Joyce’s classically brilliant collection. I can only imagine the turmoil these writers felt when they were asked to take on a story by Joyce and make it into their own. Thomas Morris, the Editor of the new Dubliners 100 discusses this in his Introduction:A Strange traffic of sorts. I will blog about this later as this editorial introduction is a short story in itself.

I have read this story so many times. First, when I was in U.C.D. and then so many times since then. The first thing that struck me was the oddness of the character of Father Flynn and the uncomfortableness of the relationship of the narrator with him. Words like paralysis stood out immediately and shaped the rest of the collection’s theme and feel for me.

The story, at its most basic level is about the narrator, a young boy and his friendship with the soon-to-die priest, Father Flynn. The story ambles along towards the “climax” where the young boy sits with Father Flynn’s sisters after viewing the priest’s corpse in his house. The sister tells us about the priest’s state of mind and how it had began to diminish over the years, leading to his death.

But, this is not just entertainment. Joyce is propping the rest of the collection up by using the word “Paralysis”. The young narrator thinks of this word when he thinks of the priest along with other seemingly strange words like a gnomon, a term for the part of a sundial that casts the shadow. Writers often leave details out so the reader can make the connections themselves and in this way, Joyce is pointing to the puzzle of the story, its details and suggestions and the whole of the novel. But, he will not give us the answer. So, when we get a hint towards the way the priest makes the young boy feel uncomfortable, we get only that hint and we will have to think more to what it might mean in terms of the whole.

The other interesting thoughts this story provokes is one of religion, mental health, death and its ability to disconnect us. These themes of paralysis or disconnection with life i.e. a death feature throughout the story in its characters and its actions. We are left inb no doubt to Joyce and his feelings on religion as in much of his writing. Religion paralyses or breaks people. Will it break the narrator? I don’t think the story points to this but the fact that the narrative is given through the first person, it allows us to hope for that the young boy is detached and can come to his own reasoning on religion and whether the priesthood is for him or not.

In Dubliners 100, Patrick Mc Cabe has been handed the honour of opening the collection with his version of this puzzling story. I will review it straight after this, once this story has been allowed to sit.

Dubliners 100 is published by Tramp Press and is being launched in Dublin on Thursday, 5th June 2014. More details here http://tramp.ie/product/dubliners-100-2/