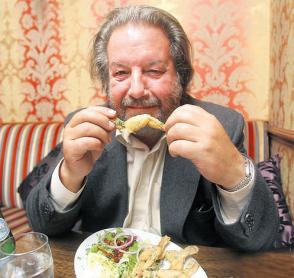 He released his Food awards yesterday and I’m going to keep it for future eating in 2012!

His Best Pub grub went to “Magpie Inn” in the lovely(I’m jealous and I want to live there) Dalkey. This pub only opened(re-opened) in September and it was packed today. We met up with my FIL and his woman and Terry came along to join in the New Year’s day fun. Everyone for a starter but I waited for my dessert and was richly rewarded. Mains included Vension, fish and more fish for Si, Fish and chips for Malcolm and Moroccan lamb burgar with sesame mayo and proper chips with big grains of salt on them for the Terry and I. Mine was delish. The wine menu is massive, with a particularly cool artisan beer menu. Dessert for me was a chocolate and hazelnut warm pudding with mascarpone and cinnamon icecream…Wrong but right…Everyone was jealous. Terry had decided not to go for dessert as the previous night, the Mimosa Cheesecake had “finished him off”. No, he didn’t collapse but it filled his stomach right up to the top and he was unable to drink anymore nice things. That made him mad and furious and angry. So, he made a New year’s resolution right there and then. No more desserts if one has eaten 6 tapas and very strong beer. It’s a pretty good resolution but he won’t keep it for long. We walked around the completely perfect and tidy village of Dalkey, bought more books in a cool second hand bookshop and headed away to Carlow.

If anyone would like to club together to buy a small property in Dalkey, I can set up an account for it? A one-bedroom, perhaps? But, in the meantime, if you cannot afford to buy a house in Dalkey, go check out the Magpie Inn…Well done, Paolo, they don’t call you a food eating expert for nothing.