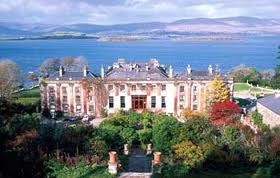 We had to check out and check in again due to a long and uninteresting story which I can tell you about, if you really want to hear! We took a walk along the marina, I wanted to reach the Hollywood-style sign that spelt out BANTRY on the hill across from our hotel, the Maritime. We reached it in record time of about two minutes and it started to rain. So, back to the car and up,up,up to Bantry House. We could/should have walked it but I didn’t want to wreck my hair.
Bantry House is gorgeous, apparently it is one of the Top Twenty Houses to visit in the World or Europe. We stood and posed for couple photos and got some nice shots of the gardens. We were getting hungry so attempted to head into the Tea Rooms, which looked rather nice as they overlooked the view of Bantry and the marina. The lady on the desk told us we normally would have to pay €5 to get into the gardens and you couldn’t visit the TeaRooms without seeing the gardens…hmmm. What she said before was quite pointless as then she told us we didn’t have to pay as the rain would mean we couldn’t get a proper look at the Gardens.
So, we went to the TeaRooms free of charge except I don’t think anyone would have cared if we had paid to see the Gardens or not.
We grabbed a quick bowl of soup and I felt all virtuous as previous lunches had involved too much food. When we were finished, we took off into the town again to have a little stroll around the shops and streets. At precisely, 2:53, Simon informed me that we needed to check in to our bedroom. Great.
It was great! In our room, (it’s my birthday on Monday) Simon had organized a big, fat chocolate cake with my name iced all it, a bottle of something bubbly and cold in a bucket of ice…these products were situated in the top of the Maritime Hotel, in one of the Penthouse Suites! Wowee, we had a stunning view of the bay and the Hollywood sign. Life is good!
I didn’t want to leave the room but a very nice and well mannered and tuned out author, Jamie O Connell was reading from his book in MA Murphy’s. Plus, the flyer promised prosecco so the choice was clear! As well, as Jamie reading, there were two other poets. All three are published with Bradshaw publishing. There was a great atmosphere and Jamie read one of his very comic short stories ” On eating grass”. It was hilarious and we all laughed along to the perfectly captured voice of a child who has a crazy life. You can read this very story here on the Lonely voice blog http://lonelyvoiceiwc.wordpress.com/2011-2/february-2011/on-eating-grass-by-jamie-o-connell/
I got to chat to Jamie after, a very nice, pleasant and unassuming guy. He currently working on his first novel but I hope he intersperses that with some more short stories!
I had to get back to the suite, the view from the balcony was calling me. Nah, let’s be honest, it was the iced bottle of something calling me! Derek joined us for a special “Julie’s fish and chips” takeout. Nice. We talked about dreams of living in Bantry for 6 months,then London and then New York for the remainder, one day, we said. In the meantime, we’ll enjoyed what we have!
I had gained enough nerves to read at the Open Mike and with a freshly cooked short story about a horrible man and my well-read Kitty stories, I made my way to the Open Mike. Michael Parkinson had just been interviewed, all the tickets had sold out but we didn’t really mind.
I read 2 of my Kitty stories and my new one about a principal. A sweaty principal who hates his job and life and doesn’t stop to think he should really let it go. No one booed me or walked out so I was happy! Simon and Derek got up to read twice and local comedian, Martin got up to read about his struggles dealing with a paranormal universe. It must be difficult, alright.
I left the lads with music and general song singing, I was tired and happy. I had read at Bantry.
Tomorrow, Kevin Barry is reading and I hope to meet with him to ask him a few questions. Tune in!