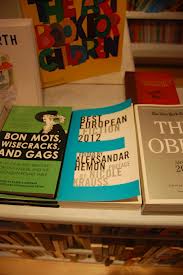 Wow, I finished a book dated 2012. My excuse is that I only got it at the end of September so give me a break, please!

This collection was like anything i have read before. It is made up of 35 different stories, 35 different authors and all from 28 different countries in Europe like Ireland, Wales, Ukraine, Spain and Slovakia, to name a few. The stories are centered around themes like love, desire, elsewhere, war, music, evil or family, which is really nice in a short collection as it gives the reader a string to hang their thoughts on.

Most of the stories were enjoyed but some, a minority were challenging for me. Some of these were a hybrid of myths and reality, a story genre I am not the keenest on but am in awe of, at the same time! Because, this collection aims to cover so much in terms of themes, voices and countries, it can be hard to not take it all in. It took me a couple of months to get through it, with some stories being easy reading and other requiring silence!

These were all translated into English from the native language and each one is translated so well that the reader would not be able to tell. I had not heard of most, nearly all of the writers, (only our Gabriel Rosenstock) which awoke me as the usual writers can take up space where new voices and freshness needs time to be aired and dried.

Some of my most enjoyable stories were Zlatka, an erotic piece that starts with he narrator enjoying having her hair washed and ending in a scary red lipstick message being graffitied across said hairdresser’s window. This strange lucidity  is narrated by a dog and does things perfectly, right down to the tragic ending where the dog repeats a poem that his master liked. It sounds cliched and as if this story has been done before but it hasn’t, honest. Really liked Gabriel Rosenstock’s Everthing emptying int white and am thinking that this may be a memoir from the man himself of a powerful attraction the author feels an attraction to a student from Lipica(where?) and uses the myth as a narrative device. It works here. Down there they don’t mourn, a Norwegian tale where the young narrator is drawn into dossing from a class at school. The student that tempts him is weird, the narrator knows that but the ending rises up violently. You’ll love it.

There are many more that I loved, the new Best European Fiction 2013 is only out so I am hoping it won’t make me wait until September for this one.