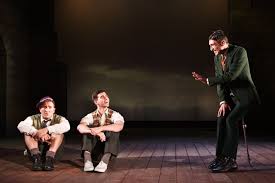 An Encounter, a short story written by James Joyce, is the second story in the Dubliners short story collection. Joyce carries on with his overarching themes of paralysis, religion, ritual and routine and the sinister, dirty man from the first story is brought to life in a new but familiar form.

We have the basic story of two young boys who go on the doss from school. Leo, the narrator and Mahony go on an adventure in various parts of Dublin. They want to break out of the seemingly boring school life they have but when something adventurous happens, they realise they don’t actually want this. The introduction of the “adventure” comes in the form of a brilliant, subtle man. Mahony leaves the narrator alone and we, as the reader, as we well as the boys are tuned in immediately to his oddness. He begins talking about girls and then moves onto the topic of whipping. This is where the paralysis sets in for the narrator and for the reader as we are left hopeless but not quite sure what will happen.

This story contains so much in it but also builds on the story before where the narrator deals with a rite of passage, death and here in this story, the narrator deals with a change in his life, a realisation that he is alone and unlike the boy who he thought was his friend. It ends on a lonely note with the narrator being glad that Mahony has returned to “save him” but yet, he realises he never really liked him anyway.

I absolutely adore this story. I love the themes. i love the writing and the description of Dublin. I love the weirdness and the way it links with the last story. I love the genius of the fact that Joyce pushes and develops his themes from story to story. This is no ordinary short story collection though can be read as just that, an entertainment but a reflection on life and what it is to be a human, with all the inner turmoil that goes with it. Joyce was a bit of a fe^&er that way. He the man.

An Encounter is the second story in Dubliners written by James Joyce. Read my next blog post where I will compare this story with Mary Morrissy’s one, her story An Encounter is published in the Dubliners 100, published by Tramp Press and launched on 7th June 2014.