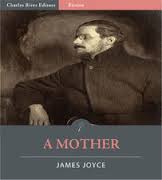 A Mother by James Joyce

A Mother is a brilliantly observed piece of society in Dublin at the time. A mother who has married because she feels she has to. Sends her children to the best schools where they learn French and Gaeilge. They learn piano and the harp. One of the daughters is due to play at a concert but the Mammy is organising and managing everything. We don’t really hear from the daughter. We end on a huge eruption on the part of the mother in front of the other performers at the concert the daughter is meant to be performing at.

This story has the most to play about with in an updated version. Ireland hasn’t moved on that much. I’ll be looking to see how the middle-class Mammy will be depicted

A Mother by James Joyce is available in Dubliners.