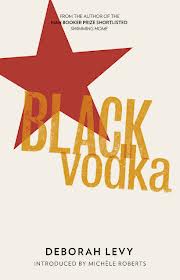 In preparation for Bantry and the West Cork Literary Festival 2013, I have been reading Black Vodka-ten short stories written By Deborah Levy. Deborah is reading at the festival and not only that her Black Vodka collection has been shortlisted for the Cork International Short story award this year,along with five others. Black Vodka was also shortlisted for the BBC international short story award in 2012 so it was well time for me to read it.

Deborah demonstrates her writing prowess by moving along in an easy to read and sometimes more complex and mystifying style. The stories are also nicely made up of longer ones and more concise ones, which is a mixture I like.

The title story, Black Vodka is a story about a young advertising executive who also has a physical deformity, a hunchback. From the opening paragraphs, we are being brought into the world of tenseness, advertising and superficiality. Where appearances matter and are dissected  and used. Levy uses the narrator and his “little hump on his back, a mound between his shoulder blades” to point out the obsession of celebrity and appearance. The narrator meets a girl, Lisa who is instantly attracted to and she him. But, she seems most obsessed with his hunchback and she ” doodles a…sketch…of a naked hunchback man, with every single organ of his body labelled.” Underneath, she writes the words “homo sapiens” Is Levy trying to get all moralistic and preachy with the reader? Is there to us than an image? A first glance? Are we in danger of becoming a slick marketing plan and don’t we all fall into this?

It has a very European feel to it, settings move from Prague in the story Shining a light to Vienna in the same title to the cool cityscape of London in Stardust Nation.

What I liked most was the way that this collection pushes and pushes the themes and contents of each short story. There is a wild sense of imagination in each story, charting the possibilities, hurt and constraints of love. This is a short story collection about love but never conventional. Levy’s writing is controlled and describes in a plain, direct way. Again, a feature I like. I cannot stand to have to consult the dictionary on my phone so much that I lose my way in a story.

For me, there are two stand out stories. We have Cave Girl, a very contemporary story of forbidden and weird love between a sister, Cass and her brother. The sister decides to have a complete surgical( we are led to believe) make over. Her brother wonders if

the surgeon slopped her into a stainless-steel tray?

Cass is a brand new person and her brother starts to fall in love with the type of girl that men seem to prefer. The brother says that

Cass doesn’t have opinions;she listens to what I have to say as if I have more important.

The problem is that now she is the type of girl that other men like to and she makes room for everyone now that she is the perfect girl. This is a story about mortality and retaining the way you look forever. The narrator asks for help from the Ancients, this is where the story deepens in the last paragraph. The Ancient would:

have answers to where souls go after death and how people transform themselves from one thing to another.

The narrator is scared of life and of death. He wonders if he is scared of the dark and things lurking in the sea. Things are not so simple now as the days of Cave girl, the narrator looks back and remains in the past.

The other beautiful and gracefully told short story I was struck by was Roma. Its opening hooked me.  The husband who is going to betray her is standing inside the city of Roma. A woman dreams her husband is being unfaithful, it is a vivid and true dream and she wakes but the traitor is lying beside her.

The dream merges with reality throughout the holiday, we do not know if she is imagining or has she entered her dream again? Levy is an incredibly poetic writer and this shines out in this tight piece of writing. the drenched succulents and rotting fishing boats have the same atmosphere of betrayal she experiences in her dream.

She stares into the shallow of the salt lagoon. A stork stands in the mud.

The narrator’s isolation and growing hatred of her husband and his sins are becoming apparent through these type of sentences. We get a resolution at the end yet the wife and husband cannot communicate the rationale behind their infidelity or dreaming. They keep a piece of themselves back.

She does not tell him that she has been standing outside the city of Roma.

There is much to like in Black Vodka. I loved the range and boundary pushing of each story, theme, characters, locations that have been created. I loved the shortness of some of the pieces and the poetry of some. I loved the range in writing that Levy shows without forcing the need to be quirky. She is naturally so, I would think that she just muses differently to others. Some of her stories are pieces that need to be re-read, dissected and discussed but all are brilliant examples of the confusion of modern love and relationships. A unique but universal collection. I am really looking forward to hearing her read her stories as this always cements their connection with me and the story.

Black Vodka by Deborah Levy is published by and other stories and can be purchased on kindle, amazon and andotherstories.org or pop down to Bantry and hear her read and get your own copy signed!