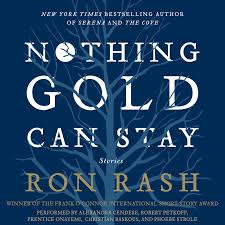 Nothing gold can stay by Ron Rash

I had the opportunity to listen to Mr Ron Rash and Rozzie-lit crush, Kevin Barry at the Kilkenny Arts Festival in August.

Ron Rash is a poet and author from North Carolina and his dialect certainly adds to the reading of his stories. He read the story “Something rich and strange” from the short story collection that I’ll be speaking about here. This story is one of the strongest and most powerful of all of the stories in Nothing Gold Can Stay.

I believe that the reason that this story works so perfectly is because of the ending. It’s simply beautiful. The story tells about a girl whose body is found in a river in South Carolina. Rash tells the story from her point of view while she is alive and switches to the search party when she parts ways. The ending is vivid because we see through the eyes of the nature around the river as it ends up going into the river and “like the last bones they would finally slip free.”

Some of Ron’s stories end in this sudden way. The endings give no indication to what may have happened and we don’t get enough information within the story to piece it together.

It’s a shame as he pretty much nails every other component like the characters, dialogue, language, structure of opening and development.

For example, in the opening story, The Trusty, a prisoner and a scorned, young wife decide to break free and escape, each leaving a life they hate. I saw the ending come off a mile away. Even so, the ending appears in the last few lines and is still quite ambiguous to what actually has happened and the importance of this event.

However, This is not the case for all of his stories. In the story “A sort of a miracle” Rash creates some fabulously developed characters. A man drives out to a wood with his two idiot brothers. The narrative switches back and forth in between, tension is built up well and we wonder whether the man or the brothers will come to an end. The ending is abrupt yet it ends on that comic note that Rash likes to use in his stories.

I really liked “The magic bus” as well. This is a story about a country girl who encounters a hippy couple on her land. She takes them in and goes on a discovery of sorts. The ending was satisfying too, issues and conflict are resolved for the main character and we gain her perspective as she sees her family and farmland in a fresh way. That’s the ending I am searching for and want to go back and read again.

The strongest and most interesting stories after “Something Rich and Strange” are “Nighthawks” and “Three A.M. and the stars were out” “Nighthawks” gets its name and inspiration from Edward Hopper’s Nighthawks 1942 painting which portrays people sitting in a diner late at night. It’s one of the most recognisable paintings in American art. The painting cries out loneliness and isolation and so too does Rash’s story. A story that uses flashback extremely well to tell a story of a teacher who is looking back to a past where she had “an accident” in the classroom and is now a deejay on a late night radio show using the moniker of Nighthawk. The character fascinated me as does the story and the telling of the actual accident. This story will sit with you for a time.

The stand out story is, for me the last one in the collection. “Three A.M and the stars were out” is a simple journey narrative. Carson is an elderly, retired Vet who is called upon often from his old friend, Darnell to help with his farm animals. Carson has recently suffered a personal loss and it is the beauty of how this communicated and dealt with by the two friends that is the miracle of this story. The journey goes from Carson’s house to Darnell’s farm where a cow is in labour. The dialogue is wonderfully masculine-short and to the point, trying not to deal with the emotions and love they have for each other.

I enjoyed the versatility of the times these stories were set in. Rash has a knack for describing his beloved Apalachian mountains and the creatures that inhabit it, bringing a sort of Breaking Bad meth element to the characters that are set in contemporary times. Its people are extremely different to most short story characters with most coming from a disadvantaged and secluded background.

I’d love to hear other peoples comments on Nothing Gold Can Stay and maybe, a helping hand to guide me towards the epiphany that I so needed in some of his stories.

When I spoke with some of the audience at Ron Rash, they were glowing with praise for him and his novels so I’m going to try some of the longer pieces of fiction by Ron Rash. Serena, his acclaimed novel is being made into a feature film with Jennifer Lawrence next year so that has to be on my list!

He certainly has the poet’s gift and he is doing something different. I’d still recommend this collection purely for the language, setting, characters and the master class Ron Rash teaches us within them.