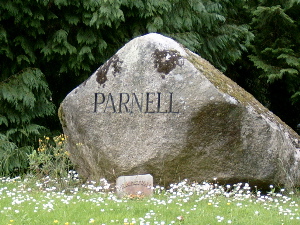 My least, least favourite of the lot of Dubliners. Thought this when I read it and think it still.

Ivy Day commemorates Charles Stuart Parnell’s death in 1891 and it takes its name from the Dubliners who, at Parnell’s funeral, wore the ivy growing by his grave in their lapels and this story is saturated with his presence.

It is Ivy Day and we find a group of political canvassers gathering together in a committee room( formerly Parnell’s headquarters) to drink, talk political stuff and wait for their money for their wages. We have a rendition of the poem “The Death of Parnell” towards the end of the story, a poem that basically celebrates Parnell. This poem causes the men to think about their lack of action, in general towards politics and history.

This story is about the death of Irish politics and the way it used to be. The Committee Room in London was where Irish politicians chose not to support Parnell as a leader in December 1890. This destroyed Parnell’s career, and, Joyce’s story suggests, the future hopes of the next generation as well.

The men in this story too are full of betrayal and have beliefs that go all over the place. They focus too much on the past so as there is no action taken. The men are also caught in the paralysis or circle of inactivity. They realise that political energy is needed and call on the spirit of Parnell but they know they will not be able to take this job on. Instead, they sit there, year after year, inactive.

I think I dislike it so much because of its content, the past, history and politics. It is also a highly male story. No women. No emotions. No thoughts for me to ponder.

Eimear Mc Bride was given the short straw with this story, come back to my next post and we will see if her unique writing style can deal with it!

Ivy Day in the committee room by James Joyce is published in Dubliners.