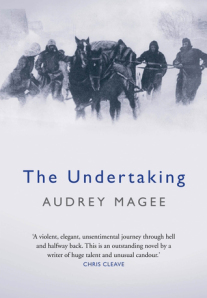 Audrey Magee’s new book form Atlantic Books is called The Undertaking and it is a grim, grim story about a man and a woman who meet, fall in love and have a pretty awful time of it. It’s set in World War 1 and we are introduced quickly to our main characters, Peter Faber, a German soldier and Katharina Spinell, a German woman he has never met. They get married to each other; a marriage of convenience that gives a ‘honeymoon’ leave for Peter and a pension for her should he die on the front. They fall in love but Peter has to return to the war front ten days after they marry.

The rest of the book flits between Peter’s awful time at war and Katharina and what she thinks is her awful time at home during the war. Though, in fairness, she does go through some bad things towards the end of the book, without giving too much away.

I liked this book. Well, it might be hard to say liked as its content was depressing and the ending even more so. But, I appreciated the story and the way it was told so simply even though the themes were massively important.

It drives home the pointlessness and evilness of war on every page, there is little happiness to be found. It would interest people who like their fiction to be raw and gritty. Audrey writes super well. Her dialogue stands out as it is so sparsely put together. She gets the reader to believe so much in a character that I understood Katharina and her view towards Jewish and Russian people even though I disagree with her. I could relate to the historical motivation of them. Because, she writes the book from the German point of view, we can comfortably look back and feel how great we are, how smug. Interesting and what historical fiction aims to do, I am supposing, though I am no expert.

I also liked that the book never gets into the boring details of war, weapons, bombing and history. It reads like a piece of fiction so it is to be recommended for lovers of historical fiction and general fiction, though it is very hard hitting and does not flinch from the reality of what happened.

The Undertaking by Audrey Magee is published by Atlantic Books here.